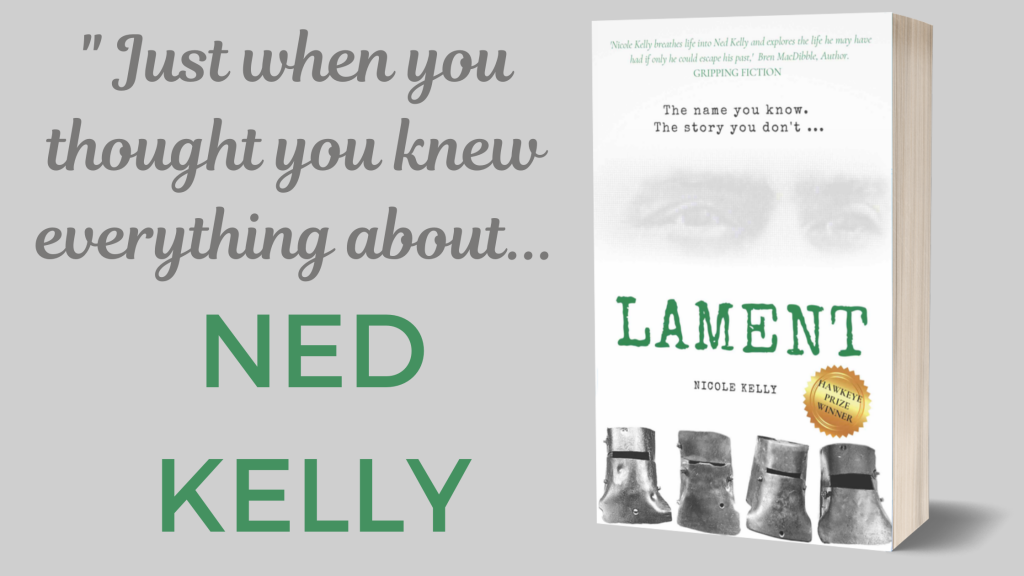 Ned Kelly is Australian folklore royalty. Every Aussie has heard the Ned Kelly story. Most think they know everythying about the bushranger, but how wrong they would be.

Recently I sat down with Nicole Kelly to talk about her Award winning book Lament. Very soon I discovered I didn’t really know a lot about Ned Kelly but Nicole soon set me right with some very interesting insights previously untold about the folk legend.

This is the Nicole Kelly story 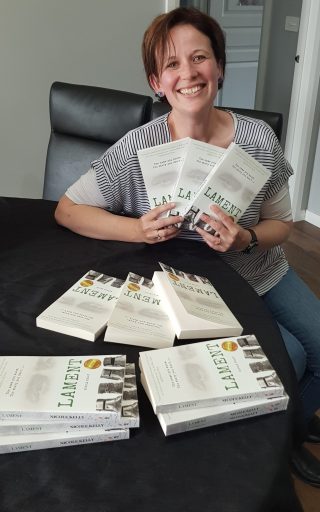 Nicole Kelly is a primary school teacher, author, Ned Kelly buff, wife, mother, writer for www.footyalmanac.com. Her book, Lament, the fictional re-telling of Australian bushranger, Ned Kelly, takes its readers from the unsuccessful true event that led to the Kelly Gang’s demise, and explores what might have been had that attempt been successful.

It’s a hotly debated topic in Australia as to whether Ned Kelly was a hero or villain. Descendants from the Kelly Gang, and those from the people they murdered, are at odds with each other.

Lament is published by Hawkeye Publishing; a growing Brisbane based publishing house. It’s receiving 5-star reviews, with calls from readers that it should be made into a mini-series. One read

To all who are wondering what book- if any- you should read to discover the intricacies, dichotomies and pluralities that make up the iconic Ned Kelly: This. Is. The. Book.

There are so many fabulous retellings of the Kelly Gang story! Lament is different because it explores what might have happened if the siege at Glenrowan had gone differently.

Where would the gang have gone? What would they have done? It’s woven around real historical events of the time, which was really exciting, because in the back of my mind I was always thinking, ‘Yes! This could actually have happened!’ As a writer, that was exciting.

I think it’s because I am a massive Kelly fan. Though, sadly, not related to THE Kelly’s. I grew up around the North-East and loved the story.

It is not a black-and-white story, which is why I think the interest in the Kelly Gang remains. Yes, they were criminals, but they were driven by loyalty and family. I was very aware, while writing, that I was writing about real people, who had real family members. I wanted to remain respectful to those I wrote about.

It’s a story that is in the Australian psyche. Everyone knows the story a little bit, but the interest remains because there are so many intriguing facets to it. The way Ned was born of a convict father, a hero at 11, English-Irish tensions, the killing of Aaron Sherritt. There is so much in the story, that it allows a different focus and keeps people’s interest.

Despite the fact that they were criminals, there was much support for the Kellys and for the gang. People hid them and sided with them. When Ned was captured, tens of thousands of people signed a petition for a reprieve.

The Jerilderie letter shows his flair with words. I think he must have been a dynamic person to receive such support. Now, Ned Kelly is seen differently by different people—A killer, a victim, a man who fought for what he believed in, a symbol of defiance.

There are some very tourist-oriented Kelly experiences, but I think that some of the best places to follow the Kelly story are the quiet places. For example, standing at the site of the Inn at Glenrowan, marked with a simple sign. I recently stood on the old bridge at Avenel. A beautiful stone bridge, just upstream from where Ned saved Dick Shelton when he was 11. A quiet moment taken at a place where history happened.

I would also have wanted to meet his sisters, especially Kate. To see what it was like to be a woman in the midst of the chaos of the Kelly Gang.

He was! I’m a school teacher, like Thomas, and I think he was incredibly brave to choose to defy the Kelly Gang and flag down the train, stopping the planned derailment. The idea for Lament started with Thomas Curnow and I wanted him to be an important part in the book.

For me, writing success would be being able to make a living from my writing. I love short stories, non-fiction pieces as well as longer fiction. But for now, I’m really thrilled that people are reading Lament and telling me that they are loving it. Meeting people who have enjoyed the story I’ve written is such a wonderful feeling!

One of the benefits of being published with a small publisher is the personal relationships that you establish. The editing process was very thorough and collaborative before publishing. Carolyn and I speak regularly about Lament and upcoming marketing opportunities, which has been wonderful.

I was very lucky to have some Kelly experts and great speakers at the Zoom event. It made for interesting banter! We even had a lovely lady attend the zoom who is related to both the Kelly and the Hart family. Being able to speak with her about Lament and her family history has been a huge highlight for me.

I would also really love to thank the small book shops and the local media outlets like ABC Radio, the Wangaratta Chronicle and Ararat Advertiser who have got behind me and Lament. Supporting our regional writers is so important and very appreciated.

Lament is available in all good bookstores, libraries and online. It can be ordered direct from the publisher at hawkeyebooks.com.au/lament/

Learn more about Hawkeye Publishing at hawkeyepublishing.com.au. They host annual short story and manuscript competitions. Details can be found at hawkeyebooks.com.au/writing-competitions/