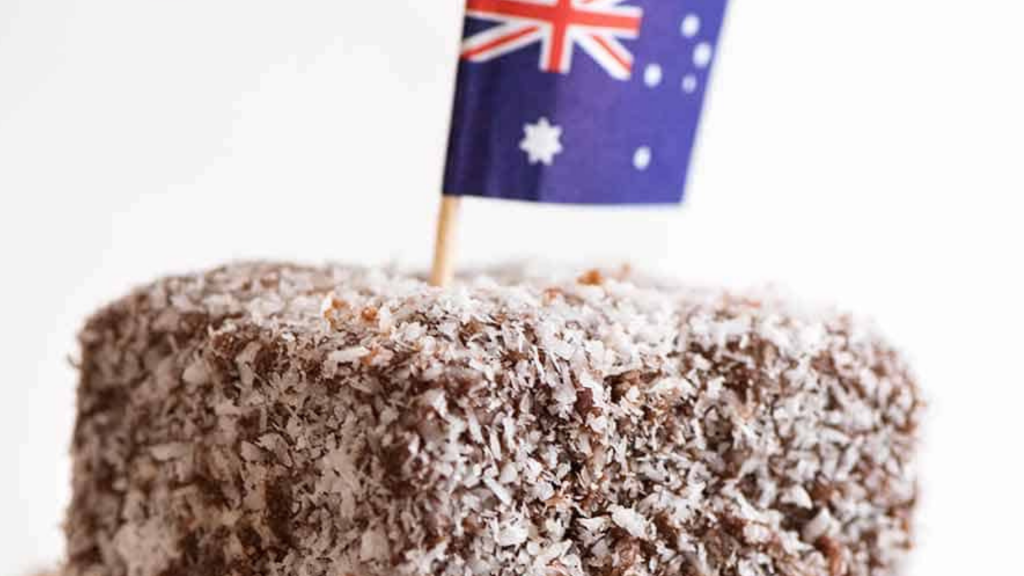 Lamingtons Are An Australia Day Tradition

On the 26 January, Australians celebrate Australia Day. An old advertising jingle once said that to be Australian you had to like “football, meat pies, kangaroos and Holden cars.

I’d add another another requirement. Like lamington cake. And let me assure you, that wouldn’t be hard to add. They are delicious! Cozy mystery fans love mysteries involving cake, especially Aussie icons.

So what is a lamington and how do you make it? Where Is My Spoon Blog has the best description.

What is a lamington?

A lamington is an Australian chocolate cake, one of the most popular Australian cakes. Together with the pavlova and the peach melba, they are the peak when it comes to desserts in Australia. No wonder… these lovely squares are as delicious as they are easy to make.

Basically, all you have is a sponge or butter cake, which gets cut into squares. All you have to do now is to dip these cake squares in a very easy to make chocolate glaze or icing and roll the squares through some desiccated coconut.

So not only delicious and easy to make, but rather cheap as well, you won’t even have to buy any chocolate to make the lamingtons, the chocolate glaze is made with unsweetened cocoa powder.

And really so good, I was really surprised. I am more into berry , yogurt and cream cakes myself, chocolate is not really thaaaat big for me, so when I decided to make this recipe, I didn’t really expect it to be THE thing for me.

Of course, I knew I would probably like the Australian lamington cake (or I would not have bothered to make the lamingtons in the first place), but I was really surprised at how much I liked them. The lamingtons are so simple, yet so satisfying to eat, they seem like a heavy affair, but they aren’t really.

The butter cake, which is a bit sturdy at first, gets so wonderfully moist and delicate after being dipped into the chocolate, the chocolate icing giving it just the right amount of moisture it needs to become soft, to achieve a perfect consistency.

And in case you are worrying about the amount of sugar you need to make the chocolate glaze, please don’t. Although it seems like too much (at least I thought so when reading the recipe), the lamington cakes are not overly sweet, they are just perfect the way they are.

THE HISTORY OF LAMINGTON CAKE

Who invented the lamington cake? There are quite a few different stories out there.

First of all there is a debate whether the lamingtons have been first made in Australia or New Zealand. The most popular story I’ve read on the subject mentions Lord Lamington, who was a British Governor of Queensland at the end of the 19th century and the beginning of the 20th.

The story goes that his maid-servant dropped a piece of sponge cake into a bowl of chocolate glaze. The Lord didn’t mind that, but suggested the cake being dipped into desiccated coconut as well, to stop it from being too messy when eaten with the hands. (Source: Australian Lamington Official Website)

Another source (The Guardian) mentions the same Lord Lamington, who discovered this cake in a bakery in New Zealand, prior to his time spent in Australia, a “Wellington – a double sponge dessert, dressed in shavings of coconut intended to imitate the snow capped mountains of New Zealand.”

To support this theory, a painting is mentioned, which shows a Wellington/ Lamington cake on the counter of a cottage painted by JR Smythe in 1888.

But, although fun to read about all these things, main thing remains, that either originating in New Zealand or Australia, the modern lamington cake remains one of the most popular foods, which these countries have to offer.

The lamington cake became very popular in Australia in a rather short period of time. It was first mentioned in a newspaper article in 1900, but by the middle of the 1910s it had already become a staple in bakery in Australia.

HOW TO MAKE LAMINGTONS:

Therecipe for lamington cake is very easy indeed. Making a butter cake doesn’t require advance baking skills and what way of decorating a cake can be easier than dipping the cake pieces in chocolate and rolling them rather unceremoniously in coconut?

Start by making the butter cake. If you wish you could make a sponge cake, but I preferred the butter cake in this case, I just assumed it would be sturdier than the rather delicate sponge, and thus stand the chocolate dipping part better.

After baking the butter cake, leave it until it is completely cool. Then wrap it well in cling film/plastic foil and refrigerate it overnight. The cake definitely needs this resting time. Just like in the case of cakes that need to be cut into several slice, making them one day in advance makes the cutting process easier and cleaner, this way the cake is less likely to break and there will be significantly less crumbs involved.

And you definitely don’t want to have huge amounts of crumbs in your chocolate icing after dipping just one or two lamingtons into the mixture.

The next day, carefully cut your cake into regular squares, the size of my lamingtons was of 5 cm/ 2 inches. I found that to be a good portion size.

Chocolate glaze or icing for lamingtons:

Start by placing a wire rack on a baking tray or piece of baking paper to avoid a mess on your counter.

To make the chocolate icing for the lamington cakes sift the icing sugar and the unsweetened cocoa powder in a bowl. Set aside.

Melt the butter in a saucepan and add the milk. Start adding the icing sugar and cocoa powder in several batches while whisking all the time. When everything is incorporated pour about half of this chocolate icing into another bowl and leave the rest in the saucepan.

The crumbling was not major, but still I found this to be a good idea, I would not have wanted all those crumbs covering the last of my lamingtons.

And I did the same with the desiccated coconut. I only gave about a third of it on a large plate, dipped some of the lamingtons, discarded the chocolate-coconut clumps that have formed, and added more desiccated coconut on the plate.

And in this case, this method was really necessary, as there were rather many clumps on the plate after dipping just one batch of lamingtons.

Make sure you also let the excess chocolate glaze drip before you roll the lamingtons into the coconut, that will also help reduce the formation of chocolate-coconut clumps on the plate.

Don’t be tempted to first glaze all the lamington cake squares with chocolate and then roll them into the coconut, make them one by one, first chocolate, then coconut and so on.

When finished, let the lamington cakes set on the wire rack (it will not take that long, half an hour should do it). You can refrigerate them to help the chocolate icing set, but bring to room temperature before serving.

Bake the butter cake one day in advance as it needs to spend the night in the refrigerator.

Sift together the flour, baking powder and salt. Set aside.

In another bowl beat the soft butter until creamy. Add the sugar and beat until pale and fluffy. Add one egg, beat well to incorporate, then add the second egg and the vanilla extract and incorporate as well.

Set the mixer at the lowest speed. Alternatively add the flour and the milk, starting and finishing with the flour. Beat the mixture only shortly until smooth, do not over beat.

Give the batter into the prepared baking dish and bake for 25-30 minutes or until a skewer inserted in the middle of the cake comes out clean. Leave the cake in the baking dish for about 10 minutes, then transfer to a wire rack and let cool completely.

When completely cool, wrap it well in cling film/ plastic foil and refrigerate over night. This will help the cake become more stable and crumble less when you dip it in the chocolate icing.

The next day cut the butter cake into regular squares of about 5 cm/ 2 inch. Place a wire rack on top of a large baking tray that will catch the possible chocolate or coconut drippings.

Sift the icing sugar and the cocoa powder. Set aside.

Melt the butter in a saucepan large enough to hold the whole icing sugar and cocoa powder mixture.

When the butter has melted add the milk, mix and start adding the icing sugar and cocoa powder mixture while whisking all the time. Add only about 1 cup at a time, whisk well and continue adding the sugar until everything is well incorporated and lump free.

Do the same with the desiccated coconut and for the same reason. Give only 1/3 of the coconut onto a plate and when the coconut gets too “dirty” and you have too many chocolate clumps in it, discard those and add some fresh coconut to the plate.

Dip the lamingtons into the chocolate mixture and coat them in coconut one by one.

When finished you can refrigerate the lamingtons until set (it will not take long), but let them come to room temperature before serving.

Nutritional information is not always accurate.

So I hope you’ll join me and sample a lamington cake on the 26th January. If so I’ll make you an honary Australian.